As a former Gurkha officer and someone who spent three months in Nepal studying Nepali in 2004, the tragedy that struck the country last weekend is heartbreaking. While I was there I spent time in Kathmandu and in Pokhara where I was based, but also in Gorkha, a little known town in between the two.

The epicentre was practically underneath Gorkha. I can’t imagine the destruction it has brought to people there, including the family of a Gurkha soldier who was serving with me in York. I met his family while I was in Gorkha that weekend in February 2004 and I was treated like royalty by them. It was a humbling experience and I worry for their fate.

Ironically I gave a talk on Nepal at a school in Bedford only two days before the earthquake struck. 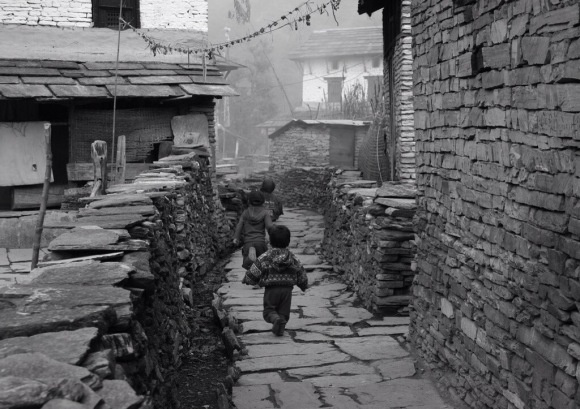 Children run through the narrow streets of Gandruk, near the Annapurna range.

Whilst so many people have been killed and injured, and with the country’s tourist sights lying in ruins, I received some good news that some of those Gurkhas who I remain close to are safe and their families are also well. But this will have a profound effect on the economy as tourists think twice about going to Nepal.

I really hope that the international community steps up and provides expertise to rebuild the infrastructure and sends specialists to look after the injured. When a country relies on its natural beauty as Nepal does, the UK must do all we can to help.

If you can spare some money for the relief effort, that would help too.